Once upon a time there were many more rifle clubs than exist today. Even my village had one and  often businesses supported their own club. This is how I started club shooting, having acquired a taste for the sport in the CCF half a century ago. My club was the Commercial Union Assurance Company Rifle Club (Cuaco). It was a friendly and pleasant club with its own range on the City Road and regular trips to Bisley. There were no range fees, all equipment was provided and ammunition was subsidised to the tune of 50%!
One, well two actually if you include a full-bore match, fixture on our calendar was our annual Challenge Match against Dunster Rifle Club in Somerset. This unexpected (geographically) competition came to pass following the move to Somerset on retirement of one of Cuaco’s senior members, Bernie Lyons. He joined Dunster to continue his shooting and, so as not to lose the connection with Cuaco presented a trophy, The Triscombe Challenge Cup, to be competed for annually between Dunster and Cuaco.
This happy arrangement continued for many years until mergers between insurers became a popular way of increasing turnover and reducing overheads. One ‘overhead’ was often the company sports club. Cuaco first lost their range, sold despite the long lease we had, and then the subsidy. Despite this Cuaco survived for a few more years using the facilities of Addiscombe Rifle Club. Nevertheless numbers dwindled as membership of Addiscombe had greater import and eventually Cuaco had to fold. Rifles and kit were given away and the odd tear was shed.
Amongst the possessions of the Club were various cups and trophies, one of which was the Triscombe Challenge Cup. As the final secretary of the club this was handed to me and placed on top of a book case where it was allowed to turn a silvery black in peace. Another trophy was the Britannia Trophy, a model BSA Martini which Cuaco awarded each year, for the most improved average if I recall correctly. This I had successfully re-purposed as the trophy for the Colchester Rifle Club Christmas Handicap Competition and this led me to think that a use should really be found for that shiny black cup on my book case.
The right thing to do would be to resurrect the Challenge Competition. Cuaco was now absent but their place in the City of London Leagues had been taken by Colchester so why shouldn’t Colchester sub for Cuaco in the Triscombe Challenge Cup? A slight difficulty lay in the fact that Dunster had now become Minehead and District Rifle Club and I had no contact details. Step in the NSRA’s Yvette Edwards, who was able to put me in contact with Minehead’s Andrew Moore. A flurry of emails confirmed that Minehead and Colchester would both like to resurrect this competition but what format should it take? Neither club had direct knowledge of the other one and our facilities are quite different. Minehead no longer did fullbore shooting as a Club. It was eventually agreed that the competition would be two teams of ten each shooting two 25 yard cards on their own range during June. The cards would be scored locally and the match decided using the Macrae Handicap system. The size of team was to extend the competition to as many as possible having an average so as to include those who would not necessarily be the first choice for league teams.
The actual shooting went without a hitch although turning the Trophy from black to silver presented a challenge in itself. I scored the Colchester cards (having excused myself from the team) and sent off a spreadsheet to Andrew (who had likewise excused himself) at the end of June, as Minehead had a macro that would take the pain out of calculating individual handicapped scores. I then had to sit and wait, albeit only for a couple of days. The email arrived. Colchester had prevailed, although only by 1000.301 to 999.772 this being the product of initial averages applied to gun scores of 1868 to 1863, suitably close!
Both clubs have agreed to repeat the competition in 2018 using, most probably the same, or very similar, format. 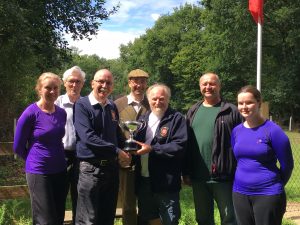 We all enjoyed the competition, not just for the shooting but for the opportunity to ‘meet’ new shooting friends. Do you or your club hold cups or trophies that are just gathering dust? I suspect that there are many unloved trophies out there, some sadly appearing from time to time on sites such as Ebay. Why not find a use for them? It could be an internal handicap competition so that the best silver is not always taken by ‘the usual suspects’ or an inter-club competition, perhaps against friends that you made during the NSRA Rifle Meetings? But re-purpose your unused cups – they deserve it!
Robin Hackshall
Colchester Rifle Club
Full results