The equipment you will use may be loaned to you by the Club and others may be sharing some of the same equipment. If you are able to own your own equipment, or even have your own FAC, it is still very important to make note of the setup of your equipment, so make sure you buy a simple note book which will be your ‘shooters diary’.

The diary should be separated into sections, the first of which should be your ‘configuration’ or ‘mechanical data’ section. 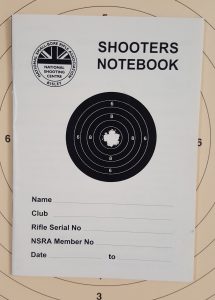 A diary you can buy at Bisley

In this section, you might record details such as:

Over time you may need to adjust your setup, or even set up a new rifle, so these details will save time and mean you can concentrate more on shooting!

You need to know the names of the component parts of your rifle if you’re going to use your diary well.

Many rifles use an ‘under lever’ action – where a lever under the rifle (between the pistol grip and trigger guard) is moved forward to open the breech, and backward to close it.

More modern rifles will almost exclusively use a ‘bolt action’, where the bolt is lifted and moved backward to open the breech, then pushed forward and down to close it.

Other than the mechanism for opening and closing the breech, all the other parts of the rifle are the same.  The main differences between older and newer rifles (especially the more expensive ones!) are the options for adjustability. Older rifles will tend to be less adjustable; modern, fully anatomic rifles will allow the shooter to adjust pretty much any aspect of the rifles’ setup.

The next section in your diary should be a page per session – whether the session is ‘practice’ or a competition.  Record your goals for that session, what happened during the session, and what your actions need to be for your next session.  This is the ‘process and outcome’ section.

For instance, I may record that I want to check the position of my butt plate during my current session.  I’ll check that I have the current setting of the position of my butt plate at the start of the session, and I’ll shoot 10 rounds with that setting.  Then I’ll lower the butt plate by, say, 5mm, and shoot another group of 10 rounds.  Next I’ll raise the butt plate from the original setting by 5mm, and shoot another 10 round group.  I’ll compare the groups, making a note of how I felt during each grouping, and whether I think any other factor could have affected the resulting groups.  I’ll make  a note of the best group and what I’ll check on my next session (assuming I’m happy with the butt plate setting now).

Another section you may want to use is your ‘progression’ – what your current ‘Personal Best’ is and what your current ‘average’ is (used for competition entries, to split shooters into classes or teams).  Many shooters like to record the scores they shoot in practice and competition, and see if they can learn anything from analysis of this data, especially when taken in correlation with their session data pages.
There may be an app for this by now of course (isn’t there an app for everything?) but a handwritten diary or journal will do just as well to start with.  If you are able to record your diary / journal electronically, you can also include pictures. Ideally images of the setup of your equipment, your position (if you can get someone to take the photos for you) and of course of your completed target/card.
The next article in this series will be on the Prone Position, so look out for it soon!