Scoring each shot on a smallbore target is done first by eye; a gauge may be used if the eye cannot distinguish the score, and then only if permitted by the rules of the competition the card is being scored for.
25 yard cards are scored ‘out’ – if the shot hole breaks the line for the next score, the shooter gets the lower score.
A 25 yard card is called a ’10 spot’ – ten equal diagrams are spaced out on the card on two groups of five, as per this image: 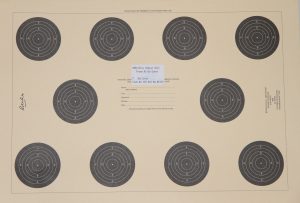 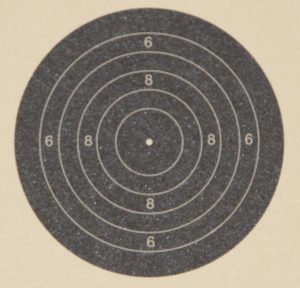 At 50 metres, shots are scored ‘in’; where a shot break the line for the next score, the higher score is given.  The shot hole must be entirely within the lower scoring zone in order to get the lower score.

As you can see in this 50m card (above), there are four shots cutting the line for the ten, and one that cuts the line between 9 and 8.  That shot scores a 9.